This is yours truly, N8QM together with his lovely wife Sandie…gripping her in a headlock! My Sandie is truly my dream-come-true girl. But there are other photos I can show.

Let’s go back a ways to my days in the Air Force. That is where I got my start in electronics. I took the aptitude test which suggested I would do well in electronics. I remember in Air Force basic training filling out a form one day where I could select a few options that I might be placed in for training and I remember selecting Aerospace Photo.

Well folks, that’s what I got. Shown to the right is a photo from my Air Force training days goofing around with friends. That’s me on the right.

My first assignment was to the bitterly cold Minot, North Dakota. From there I was assigned to the 601st Photo Squadron in Southeast Asia but spent most of my time in Thailand at Det. 9. The Det. 9 Combat Camera patch is shown at the left.

But let us move back to the present. My wife and I live with a bunch of animals on a small chunk of land with a lot of trees. So guess what… We have his & her’s chain saws. In this last year, 2020, we used them quite a bit with the storm that blew through in the spring placing 11 mature trees in a position horizontal with the planet earth. One year later we are still working those trees with plenty of uncut trees to give away to those amateurs interested in quality firewood. 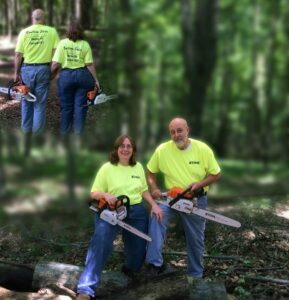 One activity that helps us get rid of the excess tree cuttings is having magnificent bonfires. Here is a video that captures the moment IMG_5576.

Another task related to those trees is doing something with the stumps. Shown at right is one stump I was able to, by some miracle, haul to the back of the property where there is a bog. I say “a miracle” because the thing was way, way bigger than my tractor’s bucket and probably about close to 1,500 lbs. I’ve done these things before and can tell you that there is a lot of technique for mechanical advantage. 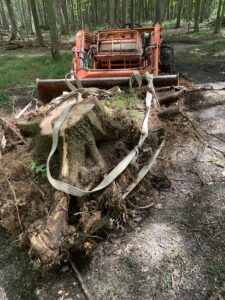 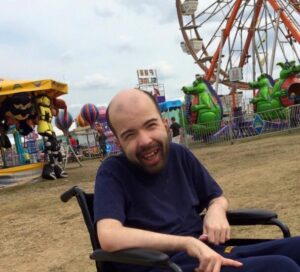 I would also like to mention my son who lives in a group home and is profoundly developmentally disabled from birth. He doesn’t have a vocabulary but understands most things one might want to say to him. Amazingly, he is a very happy adult in his mid-thirties. 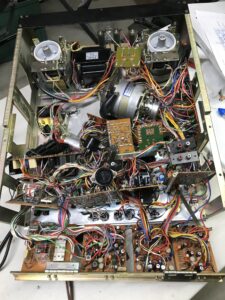 But let me say also that while I am an electrical engineer in the automotive industry, I don’t mind digging into sophisticated electrical and electronic devices. But a few years ago I learned my lesson. I decided to re-cap a quadraphonic magnetic audio reel-to-reel tape deck, replacing all of its electrolytic capacitors. I will never, EVER, do that again. 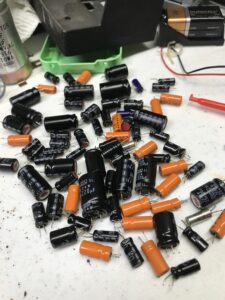 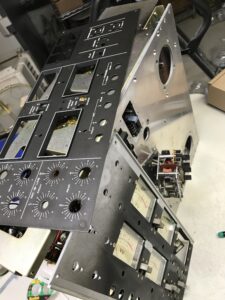 Shown at the bottom you can see the “before” photograph of the tape deck. It worked fine but I decided it would benefit from replacing all of its 1970 vintage electrolytics. If I had it to do again I would only change the power supply caps which were easy to get to. 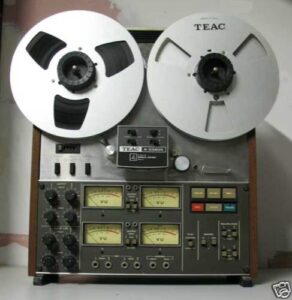 When the project got to the stage shown in the upper left photo I questioned my sanity but was not about to leave it that way. I did successfully replace every last electrolytic cap and I did get it back together in perfect condition. What’s more, it still played fine. It didn’t play any better than it did before the recap but it still runs today just as fine as before the recap.

Note also that I was able to align the heads using an o-scope as well as adjust the motor and clutch mechanisms to factory specifications.

In closing I would like to say that I am a Christian, having received the forgiveness of sins through the blood of Christ–the just for the unjust.

I think it is amazing that those professing to be wise say some of the silliest things. The late Dr. Stephen Hawking comes to mind who believed that the universe literally created itself. I certainly would not want to make fun of Dr. Hawking. He was incredibly talented in the sciences and cosmology and especially cosmogony and I respect his memory very much. But I’ll be dog-gone if he didn’t say some of the silliest things I have heard.

Because there is a law such as gravity, the Universe can and will create itself from nothing.

Of course, there is the obvious that nothing can’t create something from nothing. But consider something even simpler than that. Consider Dr. Hawking’s use of the verb “to be.” Are you catching the drift already? It is in the opening phrase of the first sentence. “Because there is a law…” We tend to think of time as an abstraction but we know from Einstein physics that matter and time exist together and cannot exist, one without the other. Dr. Hawking concedes there was no matter but assumes time existed before matter. If Dr. Hawking were here he might respond that he was using the verb “to be” as an abstraction but at a minimum, it is not allowed to make that assumption, it must be defended.

Personally, this is just my own thought. It is speculation and I have found that every time I speculate I turn out to be wrong. I cannot help but think that the very much respected Dr. Hawking was laughing to himself thinking that he could say something so outrageous as “nothing creates something” and because of his notoriety in science people would not only accept but publish it.

Such reasoning makes no sense that nothing would create something using nothing. Hawking’s illustrious predecessor, Sir Isaac Newton, formed a more reasonable and accurate assessment of the universe’s origins:

This most beautiful system of the sun, planets, and comets, could only proceed from the counsel and dominion of an intelligent and powerful Being.

Here’s another goodie that raises eyebrows: I say that the earth is thousands of years old rather than millions or billions of years. That may seem to go against the grain for one studied in the sciences and physics but that is the very reason I hold the young earth perception.

One simple thing to look at is carbon-14 radiometric dating. Diamonds and coal are supposed to be millions of years old but yet all diamonds and coal exhibit carbon-14 content consistent with only being thousands of years old–having spent only one half-life or less. All biomatter older than 100,000 years must, by the immutable laws of physics, have zero carbon-14 content. We are talking simple physics here, folks.