The Chelsea Amateur Radio Club (see www.WD8IEL.com) was asked to officiate at the 55th annual Manchester Canoe Race, collecting launch times for each canoe. The event was yesterday, May 16, 2021.

The day started out somewhat questionable with a light drizzle ever-present but not objectionable. However, after about 30 minutes into a noontime launch time, the weather cleared up to reveal a truly fine race event.

Chelsea Amateur club members showed up about 2 hours prior to launch time to review protocols, set up equipment, and validate stations. The club stationed its volunteers at the launch point where launch times were transmitted in real-time to other volunteers at the finish line. Also, members were placed along the river path to be able to report on emergencies or other events requiring professional assistance from county officials. 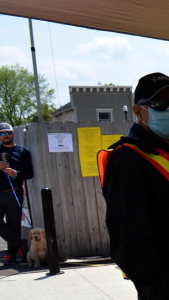 Race promoters provided a tent and tables for the Chelsea Amateurs shown seated in the picture above. To guarantee excellent and dependable communications, Wes Cardone (N8QM) brought along and deployed his go-kit antenna mast shown in the distance in the photo at left. It was not known prior to the event if an object strong enough to lash the mast to at the finish line was going to be available. However, it turned out that there was a trash receiving fenced-off area nearby with extremely strong 4×4 fence posts (see the photo at left). There was a public walkway that the coax cable had to be strung across to reach the transceiver. Armored walkway cable protectors were used for this.

With the finish line transceiver fully deployed and operational a vector impedance of the antenna was measured for 146.0 MHz and found to be 50 + j0.05 for a nearly perfect resonance and an indicated SWR of 1:1.

The protocols the club set up for communication included considerable redundancy which proved effective in catching errors in real-time. From a distance, it may seem that all that is needed for an event such as this is someone at the start line to report a launch time and someone at the finish line to capture that launch time and canoe number to pass along to the race officials. However, much, much more is needed.

At the launch site there are canoes launching often times as close as 20 seconds apart but on average about 30 seconds apart. A single amateur at the launch site CANNOT DEPENDABLY CAPTURE launch times and canoe numbers, transmit that to the finish line, wait to get confirmation and be ready for the next launch. A second person is necessary to share in this activity.

At the finish line likewise, the amateur operating the transceiver must write down the canoe number and launch time, confirm accurate receipt while a loudspeaker is blasting next to him. A second person MUST ASSIST in this activity!

Add to these activities a periodic confirmation that canoes were not missed.

Not shown in the photos is the go-bag battery that Wes (N8QM) brought to the party to power the finish line transceiver. Please see earlier blog posts on this Go-Kit Battery Protection – W8JXN and A Go-Bag Battery – W8JXN

When everything was said and done, the Chelsea Amateurs were confident that the results provided to the race promoters were accurate beyond question.