Because of poor planning on my part, the feed-point of my Buckmaster 160-meter off-center fed dipole fell from the tree yesterday to the ground. Let’s talk about

WHAT WAS THE ORIGINAL CONFIGURATION? 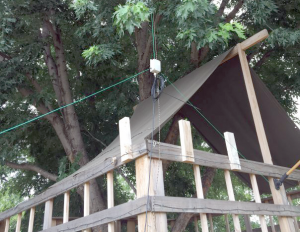 The photo shown looks similar to what I had/have for my 160m OCF dipole antenna except that I do not use a coax-choke.

A dipole antenna cut to resonate at 160 meters must, by definition, be something on the order of 260 feet end-to-end. Not everybody has the real estate to put up one of these. While I have the real estate, most of it is forested. This presents some difficulties to circumvent. First, while not a big deal for electrical reasons, you don’t want the wires getting hung up in tree branches and thereby lose a mechanical advantage or worse, give a mechanical advantage to mother nature! Somebody once told me that trees blow around in the wind which may be termed as “uncool.” It was therefore to my advantage to spend some time to identify straight-line paths available to me leading from the feed-point in both directions. It was not necessary to have a straight line end-to-end, only from each end to the feed point. 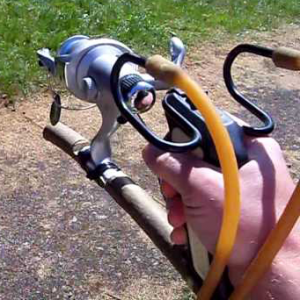 I am fortunate in that at my QTH I have a 100-foot oak tree next to the house. So, a couple of years ago when our tree surgeon visited our property for tree maintenance, I handed him two pulleys when he began climbing the oak tree telling him to mount each on the highest branches that he could.

Having a pulley mounted high in the oak tree, I was then able to run up the 160-meter OCF dipole feed point to a nice healthy 50 feet. I then found a tree about 80 feet away that presented a straight shot to the feed point. I found a sturdy branch on that tree in a high position and used a sling shot to get a length of weather-resistant twine over the branch. I then found a tree about 180 feet in the other direction from the feed point which was a straight shot.

WHY THAT CONFIGURATION FAILED

For reasons that turned out to be unimportant, in the original configuration I used a plastic water jug to serve as ballast. I was not confident that given several months of weather exposure that the pully system would still function properly to facilitate lowering the feed-point. The problem with this was that while everything else in the configuration was highly weather-resistant, the plastic water jug was not and it failed after a year of falling to the ground. Worse, that pully then became inaccessible as one of the ropes was now stuck at the top of the tree.

CHANGES IN THE NEW CONFIGURATION

For the new configuration, I dispensed entirely with any ballast as I was now confident that the weight of the feed-point alone was sufficient to operate the pully under any weather exposure history it may have endured. 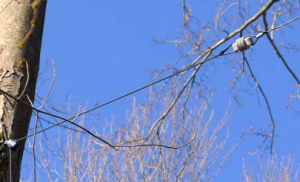 About that the only thing different with the new configuration was the omission of any ballast. However, in hoisting up the feed-point to the second previously unused pully, the disposition of the two wires changed slightly. The shorter wire was now rubbing on a tree branch about just a few feet from the feed point. What does this mean to the overall antenna operation and what dangers may exist?

The picture shown here illustrates tree branches in conflict with a dipole antenna. What should we expect from the antenna performance under these conditions? To answer this, let’s look at theory.

Let’s consider the tree branches as non-ferrous or otherwise non-conducting. I mean, how many times have you seen electric wire made of wood? Not many I am sure. You would therefore think that there would be no effect. However, anything that comes near an antenna wire has an effect on the wire’s velocity factor. If you change the velocity factor of the wire, you change the resonance of the antenna and you can expect a considerable SWR penalty. But the tree branch is only touching in one location. Therefore, the velocity factor for the wire will change at the point where it is touching and ONLY at that point. Therefore, we can consider this inconsequential. 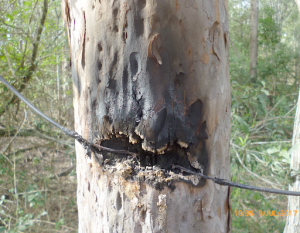 But there is something else critical that distinguishes the near-field from the far-field. The near-field STORES energy and does not spend it. This is in the fashion of reactance (capacitive or inductive) which as well only stores energy and does not spend it. But you can make the near-field spend its energy. Say for example if you touched the antenna while transmitting or placed your finger close to it so as to enter the near-field. The antenna would spend its energy on you and you would be looking for a band-aid pretty quick. Likewise, the antenna touching a tree branch may spend its energy on the tree branch. If enough energy is spent, it could light the tree on fire (unlikely). But what is more important is that disturbing the near-field will inhibit its ability to create a far-field. You want a healthy far-field so touching the tree limb is “uncool.”

Next question: Is there any relevance to a point on the antenna wire with respect to the feed-point concerning its ability to cause harm to the tree branch? To answer this question, we go back to the dipole basics. For any open circuit, there is a maximum voltage and a minimum current. The ends of the wire look like an open circuit to Ohms Law and therefore a maximum voltage appears on the antenna ends.

Next, what component of electromagnetic energy is responsible for its ability to reach out and “touch you.” The answer is the voltage component. Therefore, tree branches at the end of the wire would have a higher likelihood of experiencing stress than those next to the feed-point. In my case, the tree branches were only a few feet from the feed-point where voltage is somewhat low. My guess is therefore that the tree branch touching the wire will not be a problem.