So here we go with some prep-info: A center-fed dipole antenna consists of two electrical wires joined together at the middle by an insulator. The insulator creates a mid-point gap less than the width of your hand where a feed line will eventually be attached. We want to build a dipole antenna that is to be resonate at some named frequency.

Our trivia question for tonight’s net was:

What length must each of those two wires be in terms of fractional wavelengths and other incidentals, if any?

Obviously, many of you thought that was too simple. While that is the actual trivia question, here are more questions that will largely answer the trivia question. 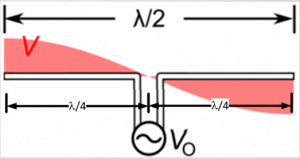 In conclusion, I need to re-iterate my standard claim that I am new to amateur radio and don’t know noth’n about no amateur radio, no-how. So don’t expect too much out of me.