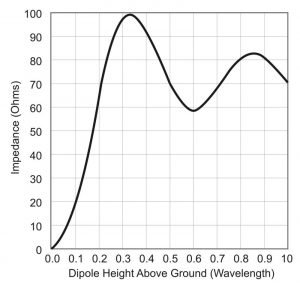 A dipole antenna is affected by the height of its feed point from the ground plane. The chart at left illustrates the relation of the real part of the impedance to the fractional height above ground for the desired resonant frequency.

Let’s note incidentally that we are talking about the real part of the impedance and not the reactive. The reactive portion of the impedance is primarily affected by the length of the dipole element wires. While there are other elements contributing to resonance, they are parasitic in nature and may, for our purposes, be ignored. An antenna can therefore be perfectly resonant but have an awful impedance owing to the real part being trashed by a distance too close to ground.

Let’s use 10 MHz as an example for the resonant frequency and say that the dipole feed point is 20 feet above ground. What is the impedance given those conditions?

If we were to place the dipole in free space, its impedance would be 73 Ohms. Free space means a very large distance from the ground plane. The chart at left suggests that at something greater than one wavelength the antenna may be considered to be operating in free space with a 73 Ohm impedance.

To answer the question on a realized impedance with respect to a distance from the ground plane, we first have to figure out what fractional wavelength 20 feet represents relative to the resonant signal. Since our desired resonant frequency is 10 MHz, we first solve for its wavelength, lambda.

What fractional distance does 20 feet represent?

Restated another way, 20 feet is about a little less than a quarter of a wavelength if our resonant frequency is 10 MHz. We are now able to refer to the chart above and read that for 0.2 wavelengths above ground, the impedance will be about 65 Ohms.

Let’s take this one step further and derive from the graphic chart an equation. Let h represent a height above ground in fractional wavelengths as discussed above. A value of Z may then be represented numerically as shown below. Note, however, that in this case, Z is only representing the real part of the impedance as long as the antenna is resonant. This will be true if the dipole is in fact resonant since the reactance will be zero leaving only the real part to contribute to the impedance. This equation has limitations and is only valid for values of

The above equation will be useful for cases where a spreadsheet would prove helpful. However, it is important to note that the equation above is only valid for the bounds of h defined above.

Plugging 0.2 wavelengths into the above equation we get Z = 64.588 Ohms. But don’t let all of the fancy digits fool you. 64.588 Ohms is really just an everyday value of 65 Ohms. Consider that the equation was derived from the chart and can only be as accurate as the chart that it came from and not better.