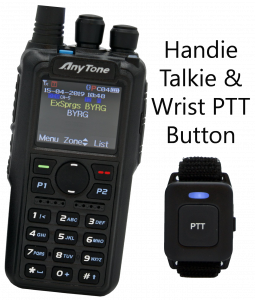 A few years back, I decided to dive into the world of Digital Mobile Radio.  I have a long history in IP networking and information technology, so I’m naturally intrigued by this confluence of networking technology and radio.  I even worked on a project with a customer who was building a new IP transport for their statewide radio network.  This interest led me a few years ago to buy a Motorola XPR7550e and a SharkRF OpenSpot2 hotspot.

To say that I struggled with the shift from programming my Yaesu HTs to the language of the DMR world is a bit of an understatement.   After reading much in the way of online docs and web pages, I managed to get the radio programmed to use a local repeater, and even made some contacts.  But I was never able to find a suitable code plug for that radio, so I was a bit hamstrung.   And unfortunately I didn’t manage to get the OpenSpot2 programmed to realize the promise of having nationwide and worldwide talk groups delivered to me over the Internet.  I knew there was a lot of potential in the DMR system, but work, family life and other interests took over, and the OpenSpot2 actually sat in a drawer for much of  the intervening time.

Fast forward to a few weeks ago, and I was talking with Dr. Karl Arriola from FEMA about comms and we got around to DMR.  After the call, I resolved myself to sorting out my DMR setup.   Likely due to all of their ads in QST, I decided to look into the Anytone family of DMR radios at Bridgecom Systems.  After perusing their web site and looking at reviews on the web, I decided to get an Anytone AT-878UV.  This turned out to be a good move.  I submitted my order and payment and in two days, the package arrived.  I’d had the OpenSpot up and running again when it arrived, but was still sorting through the myriad options for connectors, servers and such.

Upon unboxing, I was pleased to find the build quality of the Anytone radio was much better than what I expected.  I am accustomed to Yaseu handhelds (which I consider to be of very high quality), and my Motorola radio (which is of very very high, mil/commercial/industrial grade), I was concerned Chinese-made handhelds might be cheap-and-cheerful, but maybe not what I was used to in quality.

The real gem here though is finding out that Bridgecom Systems does a great job of providing PDFs, guides and links to download the Customer Programming Software (CPS) as well as library of customer built code plugs.  Even better, the purchase price of the radio includes access to their extensive library of how-to videos which spell out exactly how to setup the radio and build a code plug from scratch.  Between the videos and an existing code plug already full of repeaters and contacts arranged in useful groups, I had my radio programmed in short order.  The 878 does digital and analog on UHF and VHF, so I also programmed in a couple of local repeaters and contacted KA8VLN on the 146.88 machine.  My FT-3D has clearer audio and a bit more punch (I use an aftermarket MFJ antenna on it), but I have to say, I’m pretty pleased with how the 878 works.

After learning more about DMR through Bridgecom’s videos, I resolved myself to dig into the OpenSpot2 again.  After some experimentation, I changed the connector and configured some static talk groups.  The OpenSpot2 provides a log, that shows the DMR calls that are coming through the hotspot, so once I had a working config it was obvious.  The calls were scrolling through log and the calls were coming up on the radio.

My first international contact was Russell, M7LOM in Shropshire UK.  He was on an HT, talking to a repeater 26Km away and coming in quite clearly.   After this exchange, I have to confess, that I’m not in love with the speaker in the 878.  It’s not as clear as the ones in my other radios, but still quite functional.  Experience with my Motorola 7550e (I finally got the Motorola CPS software, that’s it’s own adventure) bears out that the 878 isn’t top-of-the line from a performance perspective, but absolutely functional and frankly more versatile.  Given the cost ($208 + shipping), I still consider this radio a great value for money.  And with the video training and other resources provided by Bridgecom Systems, it’s easy to get up and running.  If you’re looking for a way to jump into the world of DMR, check out the 878 and the packages available from Bridgecom.